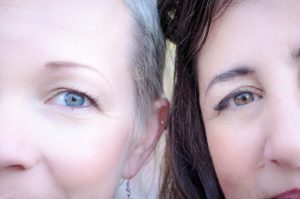 Originally from southern California, Val Blaha is a singer/songwriter and music instructor who has lived in the Pacific Northwest for over 20 years. Family legend has it that Val started singing to herself in her crib, and never stopped! She studied piano starting at age 6, and spent much of her youth performing as a solo pianist, accompanist, and in several choirs. Inspired by songwriters and performers like Nanci Griffith and Emmylous Harris, she eventually switched her instrumental focus to guitar. For the past 10 years she has performed regularly around the Portland metro area, and in early 2015, released her album “Water, Ashes & Wood” which garnered airplay on folk radio stations around the country.

It seems to Jamie that music has always been a part of her life. She began performing in choirs and playing the flute in middle school and has been hooked on stage performing ever since. Over the years, she has had the pleasure of performing in numerous choirs, and symphonic, jazz and community bands. She also loves participating in community theater. In 2013, Jamie bought a shiny new guitar and that became her new addiction. It wasn’t long before she was playing and singing songs, and in 2014, she co-founded the duo, Awaken Jane, where Jamie got her first taste of songwriting.

In 2014, Val joined Awaken Jane to add bass, mandolin and vocal harmonies. Sadly, the trio project was short-lived, but Val and Jamie were determined to continue creating music together. In December 2015, Val and Jamie officially formed a new duo, Luminous Heart.

Luminous Heart is a synergistic project, where Jamie’s heartbreakingly pure soprano blends with Val’s warm and dusky alto to weave harmonies that audiences have been raving about. They share songwriting duties, with each bringing some songs to the table, but also writing together, combining their individual talents and influences to form a unique fusion that will get your emotions swirling and your toes tapping.

2016 has been a busy year for the duo, with many performances, and a recording project completed in late summer. The duo’s first album Possibility was released October 1st, and is available at Bandcamp, CDBaby, and on most digital platforms. Cds can be purchased at shows, so please check out the shows page for their current schedule or for details about how to host a Luminous Heart house concert, and follow the duo on social media for the latest news and announcements!